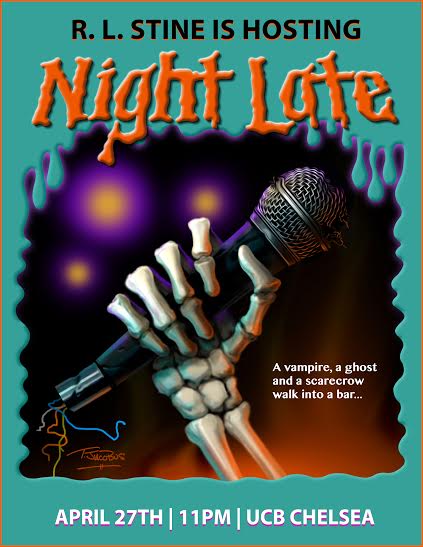 R.L. Stine is trading in the screams for laughs as he hosts Night Late, UCB Chelsea’s late night talk show, on April 27th at 11pm. Despite being known for terrifying children with the Goosebumps series, “Bob” is not the dark man you might expect. In fact, he’s quite the opposite.

As Mr. Stine himself put it, “Most people don’t realize that I was funny before I got scary. As Jovial Bob Stine, I wrote about a hundred joke books for kids.” After working through a few rehearsals, the show’s creator, Eric Cunningham, noted,  “He’s really a sweet, funny guy who just happens to write stories about terrifying monsters that kill teens.”

While die hard New York comedy fans may know that Stine has done several comedy shows around the city before, Night Late will be the most intensive of his efforts so far. “I’ve appeared at comedy shows at UCB and The Pit, but usually as the straight man. This is my first time hosting,” said Stine.

But no Goosebumps show would be complete without some of Tim Jacobus’ iconic cover art (above). Tim graciously agreed to create an original Goosebumps cover to serve as the show’s monthly poster. Fans were thrilled to see the piece, but no one was more excited than Stine himself, “Are you kidding? Tim is my favorite artist. He gave Goosebumps its look. He’s my hero.”

Night Late is a monthly comedy series at UCB Chelsea that builds a late night show around different performers each month. Past hosts include The Today Show’s Willie Geist, and The Nightly Show’s Grace Parra. See R.L. Stine on April 27th at 11:00PM at UCB Chelsea, $5 tickets available at the door or online.