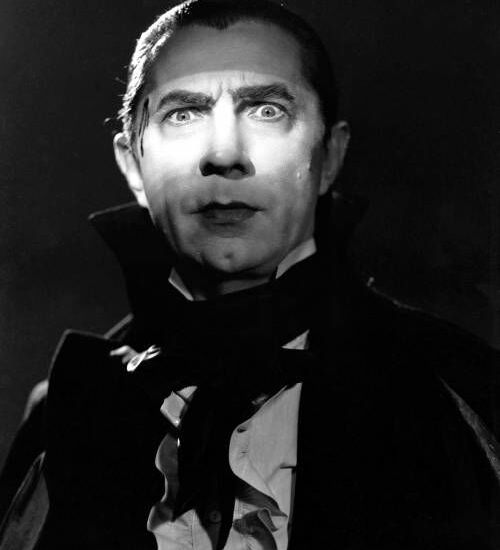 On Saturday night, October 24th, I got comfortable in my second row seat at the glorious Alamo Drafthouse, gazing up at my old comrade: the giant movie screen.

Because the Drafthouse is perfect, instead of TV show “first looks” and dull trivia, we got old movie ads, clips and oddities to watch before our show, and because it’s the time of the season of the witch—and because I was at a showing of Dracula—we were treated to a slew of old promos for Mr. Sardonicus and The Fly, and spooky commercials for things like a Creepy Crawlers toy set and Frankenstein monster-approved orange soda.

Halloween spirit was locked and set, the lights were dimming and after a brief introduction by Fangoria web editor Ken Hanley, Universal’s 84-year-old classic began, in its pristine restorative glory. I came out to see it on the big screen not only because it’s more or less the quintessential horror film (whether you’ve seen it or not, you likely know the iconic images and chilling lines, like ‘Children of the night…what music they make!’) but because I had to face my fear.

You see, I’ve only sleepwalked once in my life, and from what I’ve been told about it, it was horrifying. And it was caused by a premature viewing of Dracula.

As a kid of about eight or nine, I spent pretty much every weekend at my aunt and uncle’s house, hanging out with my cousins, swimming in the pool in the summertime, and eating lots of Blast O Butter popcorn. I don’t remember exactly when it was or what prompted it, but I remember one night, we all gathered around the TV in the living room and watched the original House on Haunted Hill, that hokey Vincent Price classic.

My uncle, a real cinephile, saw this impromptu viewing as the start of a one-day-a-week tradition: every Saturday night, we would get together and watch an old scary movie. Being a fan of all things spooky, of course I was excited. Up until this point, however, I don’t think I was really exposed to old horror. I definitely look back at this time and realize that this is where it all began for me. “Saturday Scary Movie Night” is where I learned to appreciate all the stuff that certainly informed the next 50 years of horror cinema.

Now, to screen during Saturday Scary Movie Night, a movie had to feel dated and cheesy. We’d need to feel more inclined to laugh, rather than shriek.

I remember watching Frankenstein, The Wolfman, laughing our heads off at The Invisible Man (“Here we go gathering nuts in May! Nuts in May!”), The Creature from the Black Lagoon, Abbott and Costello Meet Frankenstein, Nosferatu, The Day The Earth Stood Still, and The Mummy. I loved them all, and always seemed to go to sleep unscathed. That pretty much held up, until the night we decided to watch the granddaddy of all monsters do his Transylvanian thing.

The night we watched Dracula was also the final night of the ‘Saturday Scary Movie Night,’ simply because it affected me so much. We had watched pretty much every other major Universal monster classic, and I’m pretty sure the only reason we held off on Bela Lugosi was because the tape was out of stock at the video store.

As a kid, Dracula was always my favorite of the monsters. I wore his cape, collected any and all figures and stickers bearing his image and even took pride in not having my front teeth up until late elementary school because it made me look like a vampire. Despite all that, though, I had never seen the Dracula that inspired all the other Draculas. In other words, I was a poser. I hadn’t earned my Dracula stripes yet. But on this night, I would earn them.

My memory of that first viewing is fuzzy, but I know I was really haunted by Lugosi in general, specifically in the first 10 minutes when Dwight Frye’s Renfield hesitantly steps into the cold, desolate, cobweb-covered ruins of Castle Dracula. I don’t think my kid self registered any other part of the movie.

Quite fittingly, Lugosi’s characteristic stare that penetrated the mind and souls of his many victims worked its voodoo magic on me, lulling me into catatonia. I was petrified immediately of Lugosi’s Dracula, and it’s kind of funny that no other Universal monster film had done such a number on me, especially one like Frankenstein, which is arguably more disturbing.

But there was something about The Count. The way his face was lit, how silent he was, how dangerous he seemed. These are really the only things I remember in terms of what triggered my fear of the movie that night. Soon enough I was plagued by bad dreams, not unlike the famous neck-biter’s victims in the film. 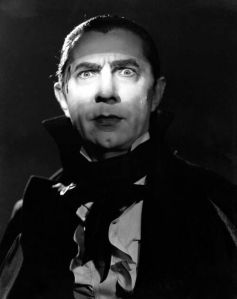 I slept on the top bunk in my cousin’s bedroom and, on Dracula night, with my eyes closed, in deep sleep, I got up and climbed down the little wooden steps that descended down to the floor, wandering almost lifelessly like one of The Count’s wives into the hallway. I stepped through the doorway of my aunt and uncle’s room, where we had watched the movie, and approached my aunt at the side of her bed.

According to her, I rocked back and forth and exclaimed “The people…the people….THE PEOOOOOPLE!”

If I were ever woken up like this, by a small kid hovering over my bed repeating those cryptic and unsettling words, I would be in therapy every day.

Who were these people I was talking about? It was so definitive; what about the people? Explain, you little weirdo! But there was nothing further said.

My aunt obviously woke up a bit startled, telling me to go back to bed. Something must’ve clicked because I turned around and headed towards the hallway. However, I made a sharp right to the bathroom and without hesitation, pulled my pants down with the door wide open, and continued to rock back and forth. Who knows what was going on in my head, but I had no recollection of it at the time, and certainly don’t now.

When I made the decision to see Dracula this year, you could say I was very curious. Having never watched the movie since “the people,” I guess I was mostly interested in finding exactly what it was that triggered this sort of response in me as a kid. And, the big question: Would I still be scared of it?

I’m happy to report that after I saw Dracula at the Drafthouse, I had a pretty uneventful sleep, free of the people. Funny enough, I actually slept at my aunt and uncle’s house that night, although not on the top of a bunk bed but in their textbook-creepy basement.

And I see now why the movie was screened during Saturday Scary Movie Night. It definitely inspires some laughs, with its over-the-top performances (the magnetic Dwight Frye hams up every scene he’s in), reaction shots, cheesy bat-on-a-string effects, and a really hilariously abrupt ending[1]. Yet, it has my respect, because it still contains some legitimately creepy and unsettling moments.

The whole beginning sequence is worth the watch alone: Renfield’s bat-drawn carriage, clacking down some cliffs towards Dracula’s estate—that tall dark castle standing ominously in the distance, waiting to swallow its next visitor. Then, of course, we get the perfect old school horror interior. 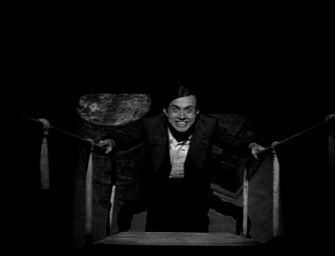 I think everybody’s idea of spooky junk comes from this film, whether they’ve seen it or not, because this introduction set the stage for everything that came after it. Lugosi is a revelation. He is Count Dracula. And whether or not that’s a good thing, when it came to his career and the limited range of opportunities he’d be given as an actor, it’s really difficult to imagine the character without him.

Every Dracula who’s come after Lugosi—even great actors like Christopher Lee and Gary Oldman—can’t be compared to him, and there’s a reason for that. He owns the role. He’s suave, sophisticated, sexual, intimidating, and, most importantly, creepy. The long shots of his eyes bulging out during his Transylvanian trance, while exaggerative, are still unsettling. As a viewer, I still almost wanted to look away.

Another amazing thing I took notice of in Dracula this time around is its lack of music, which today would either heighten the spook factor or simply serve as transitions between scenes.

This was obviously in the early days of sound, and it was more than likely a result of some technological setback, but it works incredibly well and really helps to heighten the movie’s coldness.

In Dracula’s castle, things are quiet, slow, bleak, and you feel like you’re trapped there yourself. I think these parts of the film, which show The Count in his dark domain, are precisely what scared me so intensely as a kid—and which still unsettled me at 24.

Because I like being scared, though, I wish way more of the movie took place in this environment. After the particularly atmospheric opening, we’re on a ship to London, and that’s when The Count is less the headliner in a horror plot and more the leading man in a melodrama, biting and sucking his way through a boring bunch of aristocrats. The tone is fluffier. Things don’t seem as helpless and dreadful as they were in the beginning. It’s just not as scary.

But then again, maybe I should be thankful that this time around, I didn’t end up rocking back and forth in the house, muttering “The peeeople, the peeeople, THE PEEEOPLE!”

[1] From a distance, Van Helsing stabs Dracula in the heart with the wooden stake. There’s no final shot of Dracula to show the audience what’s actually happening here, no dramatic battle—it’s simply “THE END.”