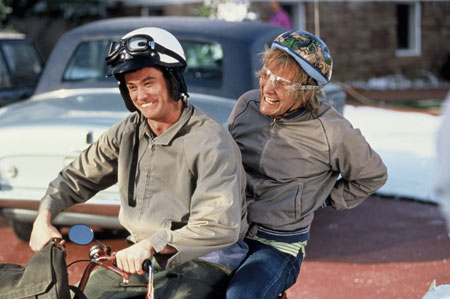 Dumb and Dumber may explain my ongoing attraction to man-children. If I were to trace this penchant as far back as possible, I believe this film is the catalyst. It sparked an enduring interest in characters who are unable to see the big picture—oblivious, driven only by their desires. I’m always looking for the Harry to my Lloyd; my blonde counterpart. I’m also still looking for those super cool gray windbreakers Harry and Lloyd wear throughout the movie. In the meantime, I settle for denim.

What I really want is someone who will take the plunge and go on a road trip with me to Aspen to return a stranger’s briefcase. Someone who will indulge the dream, my deluded fantasy that the owner of this briefcase is going to fall madly in love with me once I return it. Neither Harry nor Lloyd know Mary’s address. They don’t even know her last name. It doesn’t matter. They’ll just figure it out when they get to Aspen.

Lloyd wants Mary to fall in love with him—period. He doesn’t ever consider the fact that Mary is a married woman, desperately trying to find her kidnapped husband Bobby. Lloyd and Harry will never have to take responsibility for their recklessness. They don’t see themselves clearly and they feel they deserve more than life has given them. It is a sense of unearned entitlement to a fun life. When Lloyd is fired from his job as a limo driver and Harry is fired from his job as a dog groomer, the two of them go on a job hunt. Dejected, Harry says, “I can’t believe we drove around all day and there’s not a single job in this town! There is nothing, nada, zip!” To which Lloyd scoffs in agreement, “Yeah, unless you wanna work forty hours a week.”

Lloyd and Harry don’t have much. They have no food, they have no jobs, and their pets’ heads are falling off. It is this notion, that they truly have nothing to lose, that makes me verklempt when I think about it. It’s the way Harry says, “Okay, Lloyd, Aspen it is,” after Lloyd confesses he’s sick and tired of having nobody and being a nobody. There is something romantic about driving from Providence, Rhode Island to Aspen, Colorado to return a briefcase. Do Lloyd and Harry spend all of the money that is stashed inside the briefcase on a fancy hotel, a sports car, and neon snowsuits? Yes. Do they blow  their nose with wadded one hundred dollar bills? Yes. Does this detract from the romance and poignancy of the film? Not really.

The movie ends in the same way it begins, with Lloyd and Harry in their tired, sad gray windbreakers and slacks, carrying duffel bags, slouching down the road together kicking rocks. Salvation comes in the form of a tour bus “Hawaiian Tropic Bikini Tour”—hot, young women who stop to ask them where they could find two guys to grease them up before competitions. Lloyd and Harry are, naturally, oblivious to this incredible opportunity, and point them in the direction of town where they can find two lucky guys—twice. They blow their second opportunity, too. This speaks to the cyclical nature of the human condition—self-defeating and unlearning—other qualities that I feel make for endearing characters.

Blind faith serves a huge role in Dumb and Dumber, a film that has served as a tremendous form of comfort throughout my life. It has always instilled a desire to buy a Shaggin’ Wagon of my own and drive across the country in the wrong direction. The film, along with the soundtrack, makes me feel light, as if life is simple—this is all there is.

Twenty years later, Jim Carrey and Jeff Daniels reprise their roles as Lloyd and Harry in Dumb and Dumber To. Check out the trailer for the film, which premiered earlier this summer on The Tonight Show and which hits theaters on November 14, 2014, below: